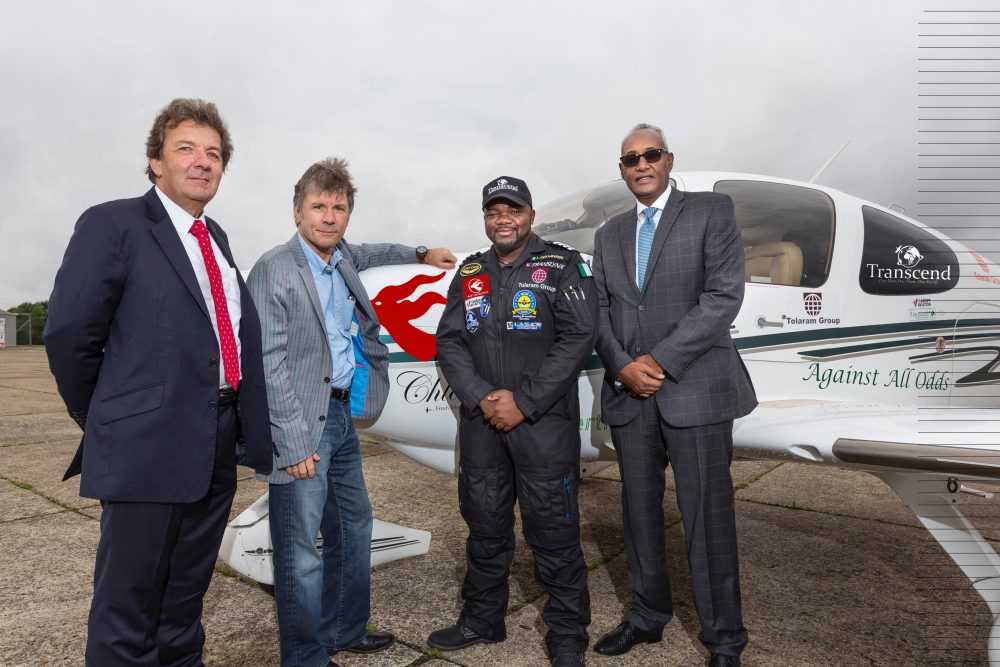 A pilot for Air Djibouti, which is managed by the aviation services provider Cardiff Aviation, is now on a mission to become the first African pilot in history to fly around the world solo.

Ademilola “Lola” Odujinrin embarked on the second leg of his historic journey in a Cirrus SR22 from North Weald airfield on 14 October. Having already completed a transatlantic crossing from Washington, D.C. in the light single-propeller aircraft, the Nigerian aviator is now heading to Malta.

He will then head on to Djibouti, where he flies as a commercial pilot for the national flag carrier. From there, Odujinrin will continue around the rest of the world, through India and Australia, and intends to set a further aviation milestone with the fastest US coast-to-coast flight in a single-prop aircraft.

The flight is part of Project Transcend, a foundation which aims to inspire young people to achieve their goals, regardless of their personal circumstances, and to never take ‘no’ for an answer.

Odujinrin says: “Fewer than 115 people have completed a solo circumnavigation of the globe by air, and it’s been my dream since my youth to join them. Air Djibouti CEO Mario Fulgoni and Cardiff Aviation Chairman Bruce Dickinson share my love for flying, and have been hugely supportive in helping me realise a lifetime ambition. I hope to set a world first and inspire a generation of people in Africa and beyond.”

He then adds: “I would also like to extend my sincere gratitude to Mr. Aboubaker Omar Hadi, Chairman of Air Djibouti, for being my main sponsor in this exciting adventure. Air travel in Africa is growing fast and set to grow dramatically in the coming years with the implementation of the African open sky policy. As an employee of Air Djibouti, it will be an honour and a privilege to play a role in this exciting growth ahead.”

The history-making aviator was waved off from the Essex airfield by Dickinson, Fulgoni and Hadi, who is also the Chairman of Djibouti Ports and Free Zones Authority, which owns Air Djibouti.

Odujinrin currently has over 4,000 hours logged as a commercial Boeing 737 pilot, having earned his commercial pilot’s licence six years ago. As a pilot for Cardiff Aviation, he is part of the company’s ‘airline-in-a-box’ proposition, which enables countries and companies to set up EASA-class airlines with minimal risk.

Through this initiative, Air Djibouti and Cardiff Aviation aim to inspire a new generation of young pilots in Africa. As Africa continues to transform and develop, a thriving and open aviation industry is key to achieving more intra-African trade and sustainable economic development.

Cardiff Aviation is a fully-approved and certified MRO and pilot training company based at St Athan -Cardiff Airport Aerospace Enterprise Zone in South Wales, United Kingdom. Operating from a former RAF maintenance base with parking for up to 20 narrow-bodied airliners, Cardiff Aviation can conduct MRO work on aircraft of almost any size, including Boeing 737s, 757s and Airbus 320s.

Cardiff Aviation also has two Boeing 747 training simulators and one of just two Sikorsky S-61 helicopter simulators in the world. Customers for the MRO and training facilities include Air Atlanta Icelandic, the Royal Malaysian Air Force and British International Helicopters.

Air Djibouti is a venture owned 100% by the government of Djibouti.

Djibouti Ports and Free Zone Authority (DPFZA) is the governmental body overseeing ports in the country. The organization also oversees the national free trade zones, serving as a liaison between the companies working therein and other government agencies.

Air Djibouti’s activities were relaunched in May 2015. The management of the airline was entrusted to UK based Cardiff Aviation, led by Bruce Dickinson.