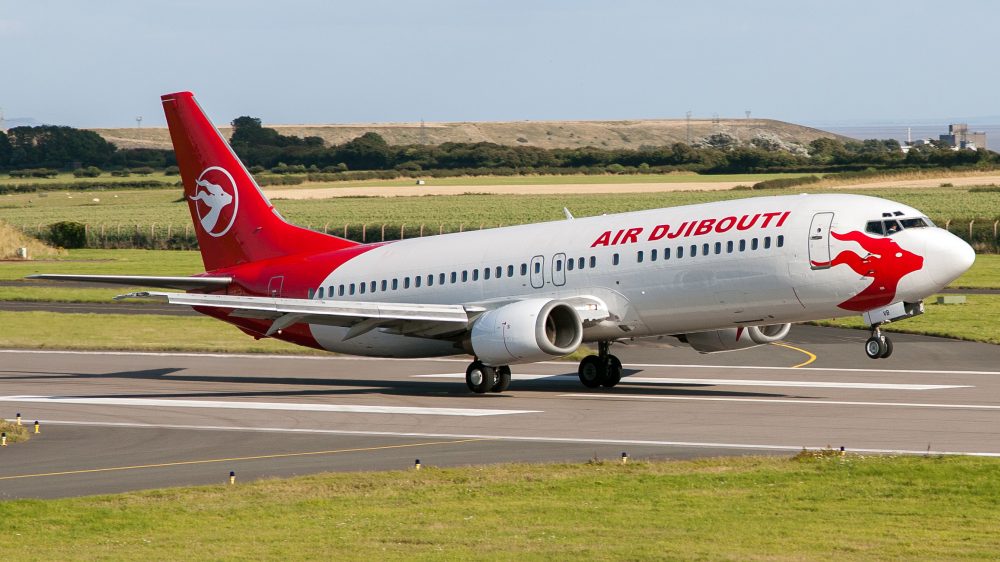 Today Air Djibouti took delivery of the first Boeing 737 aircraft in Djibouti in preparation for the launch of Air Djibouti’s new commercial operations.

His Excellency Ismaïl Omar Guelleh, President of the Republic of Djibouti, Mr Aboubaker Omar Hadi, Chairman of Air Djibouti, along with other dignitaries, met the plane and crew at Djibouti’s International Airport in a ceremony welcoming this important step in Djibouti’s development as a global transport hub.

Bruce Dickinson, Chairman of Cardiff Aviation, which provides Air Djibouti with operational management, delivered the Boeing 737 personally. The plane travelled from Cardiff, stopping in Malta for re-fuelling. The plane will officially go into service on August 16, flying to regional destinations initially.

Air Djibouti plans to introduce two BA146-300 aircraft by mid-September and mid-October, and a Boeing 767-200 in December this year, initially operating between Djibouti and London. Other international destinations are expected to follow soon after, as well as regional freight services.

The launch of Air Djibouti’s commercial operations is a crucial element of the Djibouti Ports & Free Zones Authority (DPFZA)’s strategy for establishing Djibouti as a major logistics centre for the region. With two new airports under construction that are expected to be operational by 2019, the country is building its air transport links to complement its already well established road, rail and maritime transport network.

Bruce Dickinson said: “The arrival of the first aircraft comes at a particularly exciting time for the region as Djibouti leads in spearheading the growth of aviation in East Africa.”

Djibouti is strategically located on the second busiest shipping lane in the world. It is a natural meeting point for the East and West’s global business development. The DPFZA is working to replicate its success in port logistics in the aviation sector. Air Djibouti’s commercial operations will further develop the country’s international connections and accessibility. Djibouti’s current transport and logistics infrastructure programme exceeds $15 billion.

Aboubaker Omar Hadi, Chairman of Air Djibouti and Djibouti Ports & Free Zones Authority, said: “Today’s flight shows how Djibouti is opening up to become a major global trade and investment hub. With investment in our port facilities, free trade zones, the upcoming completion of the Addis Ababa-Djibouti railway and the launch of sea/air cargo transportation, Djibouti is completing the multimodal transport missing link. In doing so, the nation confirms its position as a trade and transport hub. The establishment of a flag carrier is an integral part of the DPFZA’s drive to achieve excellence in logistics.”

Air Djibouti is a venture owned 100% by the government of Djibouti.

Djibouti Ports and Free Zone Authority (DPFZA) is the governmental body overseeing ports in the country. The organization also oversees the national free trade zones, serving as a liaison between the companies working therein and other government agencies.

Air Djibouti’s activities were relaunched in May 2015. The management of the airline was entrusted to the UK based Cardiff Aviation, led by Mr Bruce Dickinson.

Operating from a former RAF maintenance base equipped with 6,000ft ILS runway and parking for up to 20 narrow-bodied airliners, Cardiff Aviation can conduct MRO work on aircraft of almost any size, including Boeing 757s and Airbus 320s.