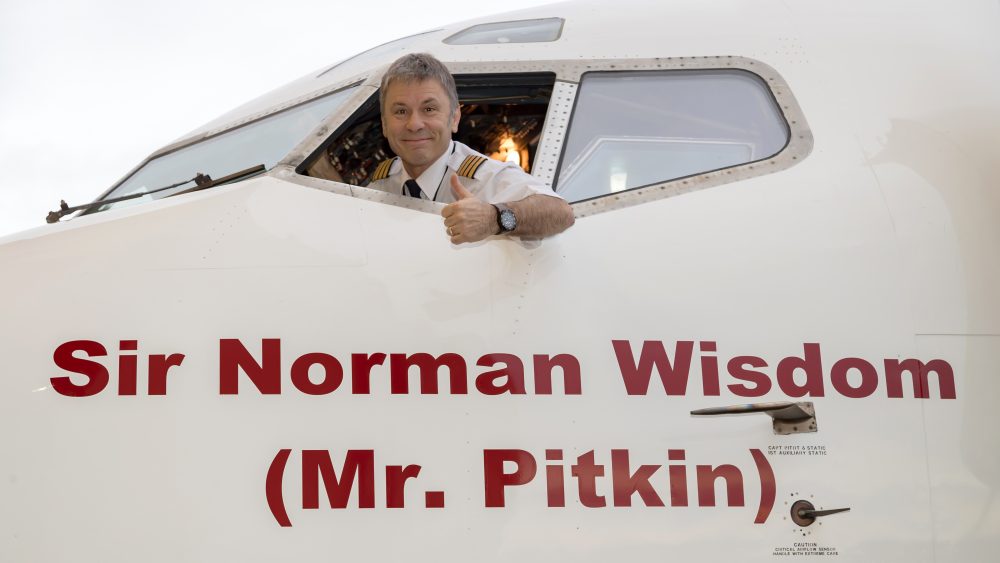 Cardiff Aviation Chairman Bruce Dickinson has personally delivered the latest aircraft to join the company’s ACMI fleet to Albawings in Albania – with the Boeing 737-400 taking its name from the Mediterranean nation’s unlikely British cult hero.

Sir Norman Wisdom (Mr. Pitkin) made its maiden voyage from Cardiff Aviation’s world-class MRO facilities at St. Athan to Tirana today, and is named in honour of the British comedian and his most famous character, who together enjoy enduring popularity in Albania.

Dickinson says: “When we first entered into negotiations to provide a new aircraft to service routes from Albania, we were pleasantly surprised to find out just how respected Sir Norman is across the country. We’re delighted to honour his memory with our latest aircraft as ‘One good Turn’ and of course, we expect it to be a much smoother operator than Mr. Pitkin!”

The Boeing 737 will carry out operations between Albania and Italy over Winter 2016-17, giving Albawings additional capacity on highly popular routes.

Dickinson says: “With Mr. Pitkin , we’re delighted to be the ‘Man of the Moment’ and we hope this is the foundation for an ongoing long-term relationship based around our ACMI operations.”

Mr. Pitkin is the second 737-400 to join Cardiff Aviation’s ACMI airline in six months, with its sibling on operations with Air Djibouti. The African airline was launched in August 2016 via Cardiff Aviation’s ‘airline in a box’ business model, which allows companies and countries to establish airlines with minimal financial risk.

Operating from a former RAF maintenance base equipped with 6,000ft ILS runway and parking for up to 20 narrow-bodied airliners, Cardiff Aviation can conduct MRO work on aircraft of almost any size, including Boeing 757s and Airbus 320s.