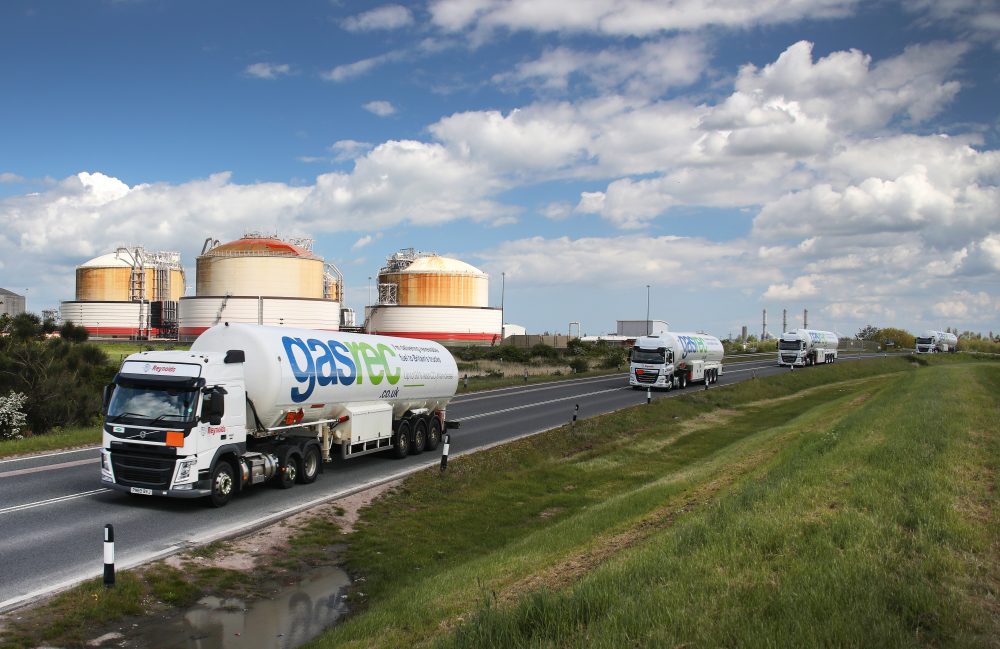 Gasrec is celebrating a milestone achievement with Grain LNG after collecting the 10,000th tanker load of LNG (liquified natural gas) from the National Grid facility on the Isle of Grain.

Demand for LNG in the road transport sector has soared in recent years, as operators continue to look for more environmentally-friendly alternatives to diesel in order to meet the government’s increasingly stringent targets to reduce carbon emissions. The off-grid industrial sector has also seen strong growth for LNG as a cleaner substitute to fuel oil.

In March, Grain LNG broke its previous monthly loading record – filling 310 cryogenic tankers with the fuel. In total, 2,149 tankers filled up at the facility in 2020 and National Grid expects utilisation to increase by as much as 80 per cent over the course of 2021.

“This signified another milestone in the terminal’s contribution to both the security of the UK’s energy supply and Grain LNG’s role in the country’s transition to using cleaner sources of energy. We are confident that Grain LNG and its customers have many more milestones ahead as demand continues to grow with the increasing use of cleaner transportation fuels.”

Gasrec – the UK’s leading supplier of biomethane to the road transport industry – has also seen exponential growth in recent years, with the company now supplying approximately seven times more gas to fleets than at the start of 2019.

The business provides customers with Renewable Transport Fuel Obligation (RTFO)-certificated Bio-LNG and Bio-CNG (compressed natural gas), with the former seeing the largest spike in demand – due largely to its suitability for long-haul work and the size of the 6×2 tractor unit market in the UK. Sales of Bio-LNG from Gasrec’s flagship site, located close to Daventry International Rail Freight Terminal (DIRFT), grew by more than 250 per cent in the last 12 months alone.

Rob Wood, Chief Executive of Gasrec, says: “This landmark loading at Grain LNG marks another significant milestone for us in the continued expansion of the sector. Bio-LNG is proven to be the most environmentally-friendly fuel currently on the market for long-haul operations and will continue to be so for the foreseeable future.”

To keep up with demand, Gasrec recently invested in four additional tri-axle tankers, to take its delivery fleet up to seven – with a further two currently in build and due on the road later this year. Each tanker is capable of carrying up to 20 tonnes of Bio-LNG.

Grain LNG’s truck loading facility – which has the capability to fill more than 13,000 tankers per year – went live in November 2015, with Gasrec’s first load taking place in January 2016. The company now loads on average 70 tankers of LNG per month, before delivering the fuel to its open-access and private customer facilities across the UK.

Grain LNG is the largest LNG terminal in Europe with the capacity to store 1 million m3 of LNG and claims a best-in-class safety record. Last year, the Grain team announced it would be expanding the facility to accommodate a new capacity contract with Qatar Terminal Limited. From mid-2025 the storage will increase to 1,200,000 m3, with the facility’s capacity already fully booked until January 2029. The site has two jetties, one of which is able to accommodate the world’s largest QMAX ships – each the length of five football pitches. Cargoes currently arrive at Grain LNG from all over the world, including Qatar, Trinidad, Algeria, Russia and the USA.