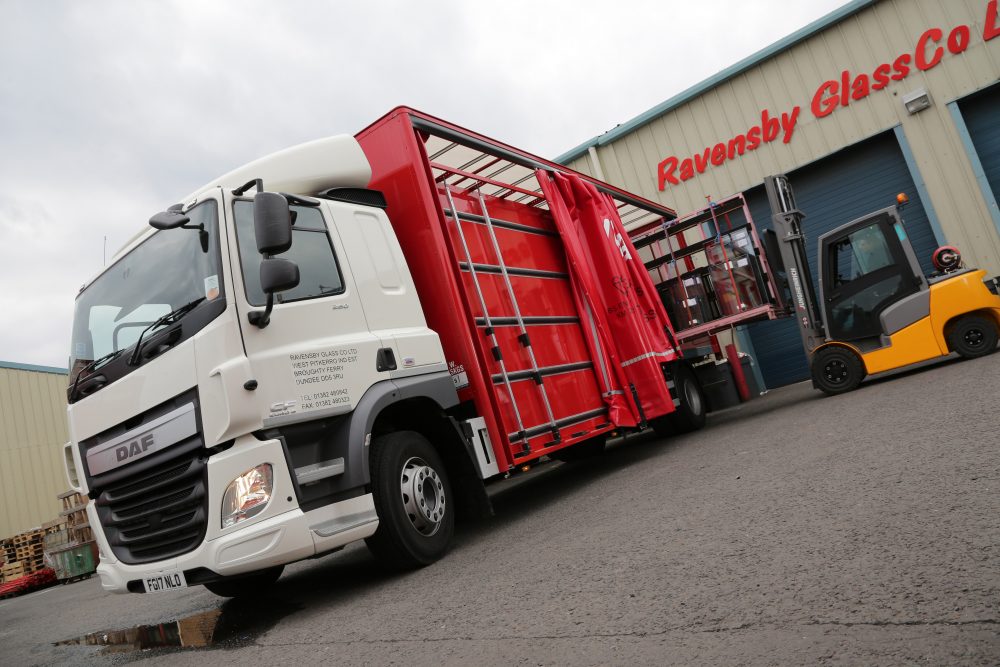 Fraikin has supplied Dundee-based Ravensby Glass, a specialist manufacturer and processor of insulated glass units, with five new trucks on a full-service contract hire agreement for the first time.

Ravensby Glass has signed a six-year deal with Fraikin, with the new arrivals comprising two 18-tonne curtainsiders and three 18-tonne glass carriers, all specified on DAF chassis to strengthen their 18-strong fleet.

Key to the customer’s decision to place the order with Fraikin was their ability to take over ownership, financing, compliance and maintenance of the new vehicles – removing many of the hassles typically associated with fleet ownership, and allowing Ravensby Glass to focus on its business operations.

Nicholas Cunningham, Chairman at Ravensby Glass, said: “Fraikin showed early on in our conversations that they really understood our business, so the deal made perfect sense. They control the maintenance and management of our vehicles which releases our own staff to concentrate on our core activity of glass processing.”

The trucks will be operational up to six days a week and cover about 60,000 miles each year. The DAF glass carriers have been built on full air suspension and with a special racking unit inside the loadspace to provide maximum protection for glazing products during transit.

All vehicles are also equipped with their own on-board tracking systems to allow the Ravensby Glass administration team to track payloads from collection to delivery.

“We have expanded to become Scotland’s largest independent supplier of insulated glass units, so the deal means we can focus our attention on expanding the business further,” adds Cunningham.

“We have already started to retire some of our older vehicles, with the hope of replacing more of our fleet with the latest generation commercial vehicles in the future. As we haven’t procured vehicles on contract hire before, Fraikin’s professional approach made the process very straightforward and easy to understand. We’ll certainly be looking at going down this path again.”

Established in 1985, Ravensby Glass is part of Malcolm, Ogilvie & Co. Group which has had roots in manufacturing in Dundee for more than 170 years.

It has established a significant portfolio of products utilising a wide spectrum of glass and associated systems, supplying to the public, residential, commercial, historical and museum sectors within the glass industry.