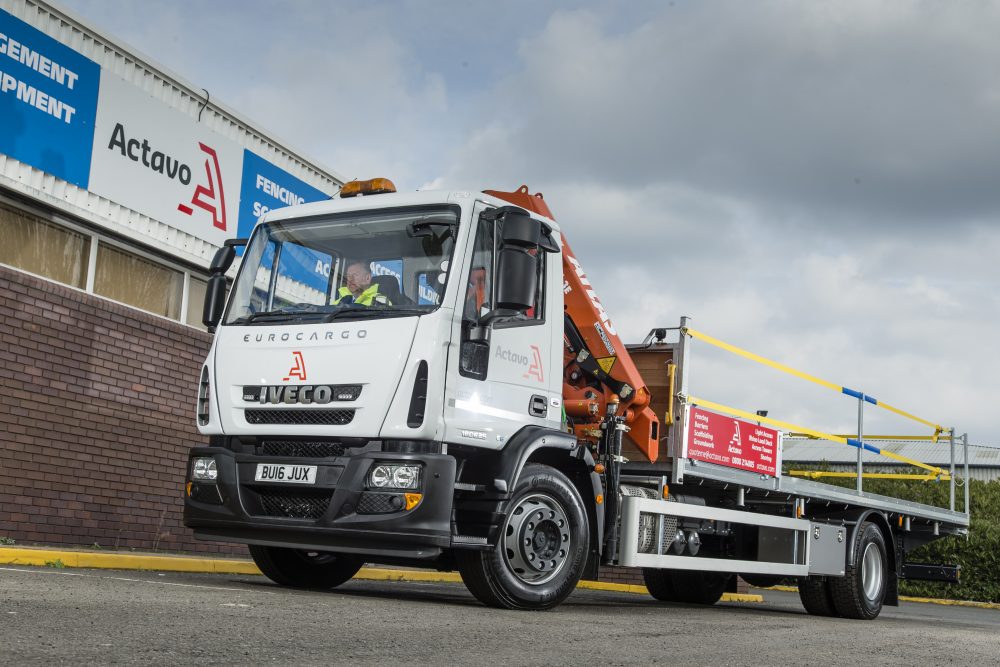 Fraikin secured the order following a competitive tender, and on the back of its proven ability to keep Actavo’s fleet on the move. The 18-tonners replace existing assets and join 10 3.5 tonne vans and seven 7.5 tonne rigids already supplied by Fraikin, now accounting for nearly two-thirds of the total fleet.

Equipped with Atlas 126.3 A2L radio remote controlled cranes, the trucks’ safety features include an obstacle detection system fitted to the nearside to warn the driver of vulnerable road users and an edge-protection system which prevents falls while loading and unloading. Fraikin has also mounted an on-board weighing system to guard against any risk of overloading – a useful feature when delivering payloads of scaffolding and fencing to construction sites.

The full-service contract hire deal means that Actavo benefits from predictable monthly costs, with Fraikin handling all servicing and maintenance, administration and documentation. This leaves the Actavo team free to focus on their core business.

Gary Clark, Head of Fleet at Actavo, says: “We chose Fraikin because it provides comprehensive fleet support. Vehicle safety and uptime is paramount to our business, and with Fraikin’s around-the-clock service, I know I can make one call and everything will be taken care of.”

Fraikin’s involvement in this latest delivery began long before the trucks were even ordered. Fraikin worked closely with Actavo to develop a new vehicle specification to make the vehicles as safe, efficient and robust as possible. This attention to detail has ensured the vehicles are a perfect match for Actavo’s fleet, with each asset to remain on contract until 2021.

Commenting on the benefits of contract hire, Clark adds: “The predictable monthly costs and complete service package help support our business growth. Fraikin has made itself the easy and obvious choice of supplier.”

Actavo is a leading international strategic operations partner with a global workforce of approximately 5,000 operating in a variety of sectors, including construction, power generation, satellite and telecommunications and industry. Since November 2015, Actavo has been the new name integrating brands including Deborah Services, Sierra, Roankabin, Roan Building Solutions, EventServ, PDC, Siteserv and Siteserv Access & Formwork – under one clear, progressive corporate offering.