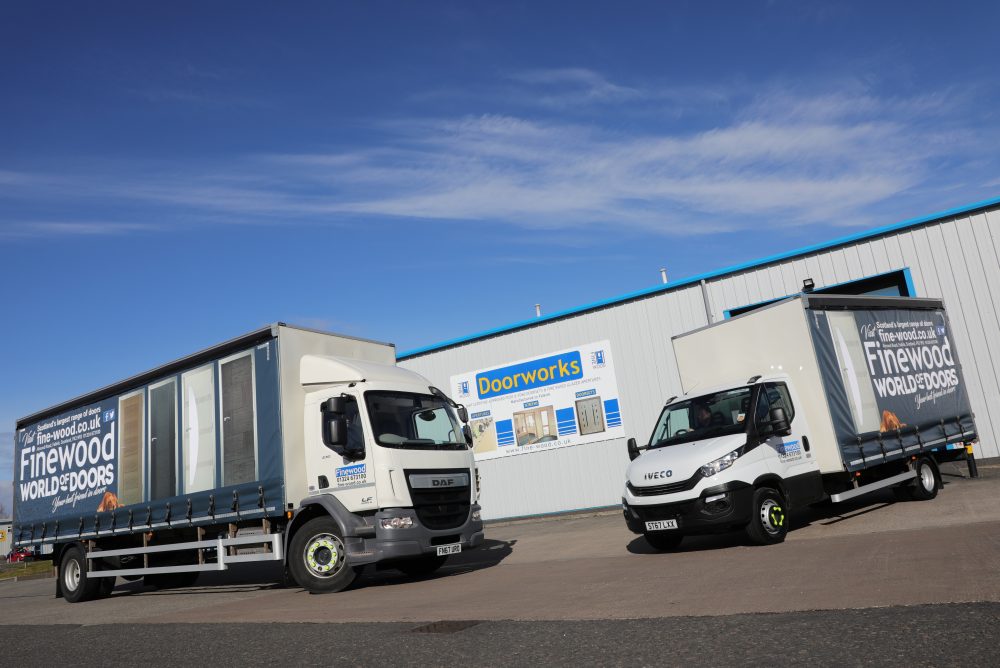 Finewood Joinery, Scotland’s largest door importer and supplier, has taken delivery of two new commercial vehicles on a five-year, full-service contract hire agreement from Fraikin, signifying a move away from outright purchase for the first time in the company’s history.

The new 18-tonne DAF LF and 7.2-tonne IVECO Daily curtainsiders replace two similar sized Mercedes-Benz Ategos within a four-strong commercial vehicle fleet, and will operate alongside a 26-tonne Atego and a 3.5-tonne Renault Master, with each vehicle on the road up to five days a week.

Both new vehicles are mounted with Tekbo bodywork and technology including side and rear-view cameras to help drivers monitor potential blind-spots and ensure maximum safety around cyclists and pedestrians in busy urban environments. The trucks have been accredited for the Fleet Operator Recognition Scheme (FORS), ensuring they both meet the highest safety standards.

Key to securing the business was Fraikin’s forward-looking approach and ability to modernise the Finewood Joinery fleet with the latest generation Euro VI vehicles offering improved efficiency and reliability. The contract hire package means all financing, compliance and maintenance issues are taken care of, allowing Finewood Joinery to concentrate on growing its business.

Willie Anderson, Managing Director at Finewood Joinery, says: “Fraikin took the time to show how contract hire would offer genuine benefits for our business, which made it an easy decision for us. Having two brand new vehicles reflects well on us as a company, and as servicing and maintenance is also included, it’s one less thing for us to worry about.

“We worked closely with Fraikin to tailor the specs of these two new vehicles with innovations to make them as safe and efficient as possible. We’ve been very impressed with how easy the entire process has been and look forward to growing our fleet with them.”

Fraikin tailored the contract hire agreement to include all servicing, maintenance and repair on a collection and delivery basis via the company’s third-party service network. The agreement also includes tyre replacement, road fund licensing and 24/7 breakdown support.

Established in 1990, Finewood Joinery has been supplying products from its Falkirk base to builders and timber merchants, housebuilders, councils, joinery contractors and homeowners across Scotland for 28 years.