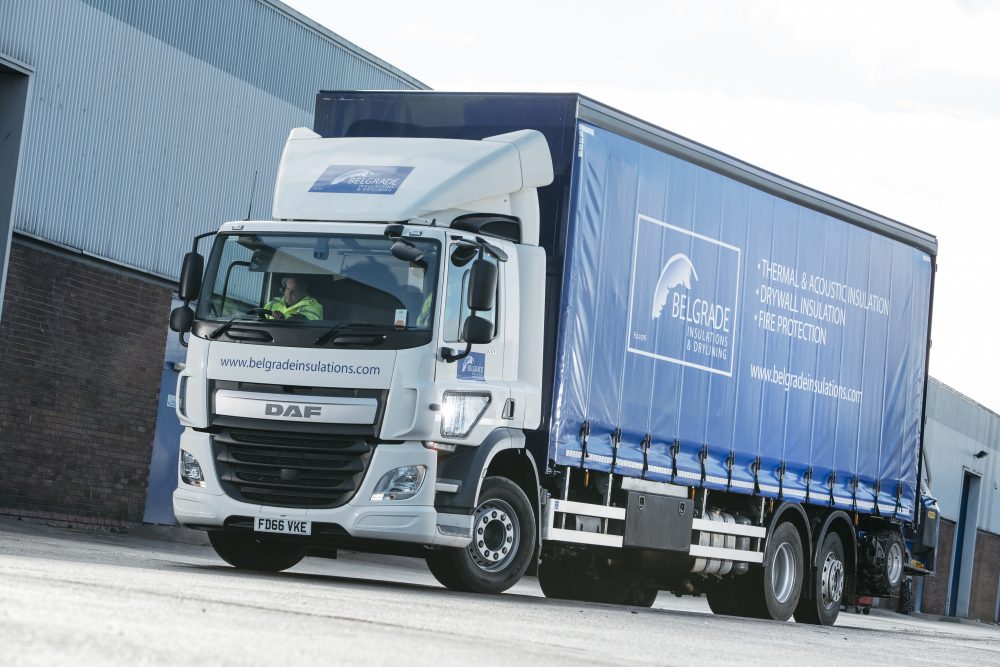 Fraikin has signed a new full-service contract hire deal with Belgrade Insulations, a nationwide supplier of insulation and drywall systems, helping the business push on with its growth plans in the UK.

The seven-year agreement sees Fraikin supply the company with an additional two 26-tonne DAF curtainside trucks, each with a truck-mounted forklift located at the rear to facilitate easy loading and unloading in any location. Both vehicles have been accredited for the Fleet Operator Recognition Scheme (FORS) to maintain the highest levels of safety.

To maximise safety on the road, the vehicles are supplied with an Aztec window on the passenger side to give drivers improved blind-spot visibility. They also include both reversing and near-side cameras – a new feature for Belgrade Insulations’ vehicles – to ensure cyclists and pedestrians are in full view of the driver.

The assets represent additions to the firm’s existing fleet and will be based at its Birmingham and Wellingborough branches. Each vehicle will be in operation five days a week, transporting insulation and drylining equipment to builders merchants and construction sites across the country.

A significant factor in securing the deal was Fraikin’s ability to manage the financing, compliance and maintenance of the vehicles – allowing Belgrade Insulations to concentrate on expanding its business.

Alex Khan, Managing Director at Belgrade Insulations, says: “We’ve worked with a number of contract hire providers and have often found they’re unable to deliver on their promises. Dealing with Fraikin has been a breath of fresh air – they have consistently gone above and beyond to deliver, which has helped facilitate our rapid expansion.”

Commenting on the firm’s preference for contract hire, Alex Khan adds: “It allows us to focus on our core business activities, safe in the knowledge that a supplier with a strong industry pedigree is ensuring our vehicles are well maintained, efficient and fully compliant. Fraikin very quickly got a firm grasp of how we work, so we hope this will be the start of a long business relationship.”

Belgrade Insulations has been trading since 1976 and provides products to all sectors of the construction industry. As well as its branches in Birmingham and Wellingborough, the company also operates facilities in Glasgow and Leeds.