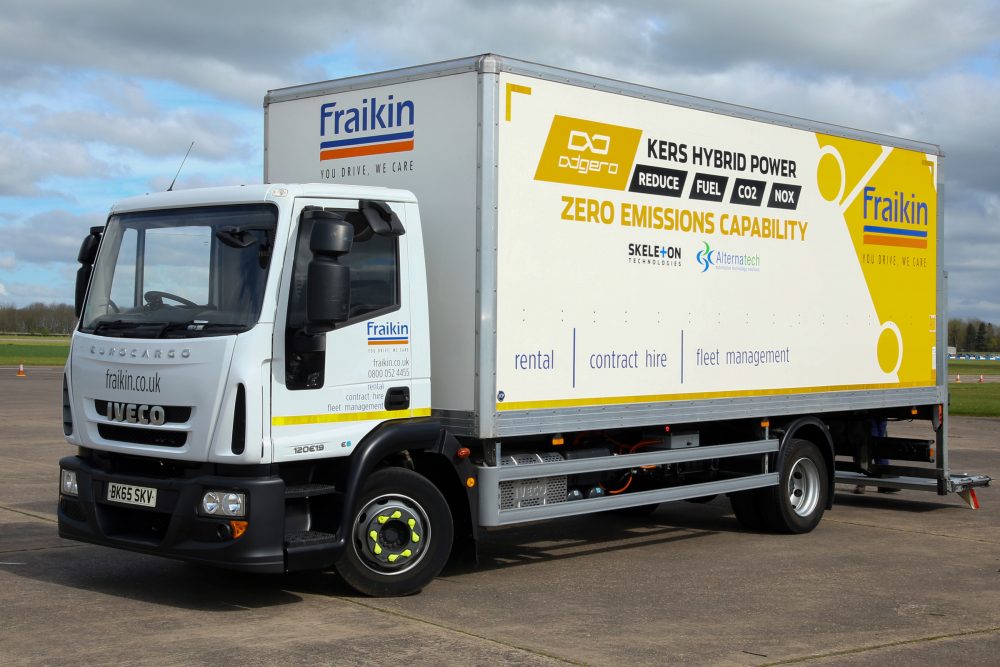 The KERS device has been installed by UK vehicle conversion specialists Alternatech, which worked alongside hybrid technology specialists Adgero and Skeleton Technologies to get the vehicle on the road.

The KERS system works by harnessing the energy created under braking. This energy is stored in a set of ultracapacitors – a lighter, less costly and more efficient alternative to lithium-ion batteries – then used to provide acceleration assistance via an electric motor fitted to the prop shaft.

Colin Melvin, Sales Director of Fraikin, explains: “We talk to customers every single day about new ways to reduce environmental impact – it is something we are really passionate about. By being the first adopter of KERS on a rigid truck, we have put our customers at the front of the queue to trial this new technology within their own fleets.”

Will Putter, Commercial Director at Alternatech, says: “After teaming up with Fraikin in 2016 to offer bi-fuel LPG-petrol vans, they seemed the perfect choice to field test this new technology. We truly believe that the ‘free’ energy created under braking is a power source worth utilising, and the lower emissions, fuel usage and operating costs the system achieves certainly backs that up.”

The KERS technology, developed by Adgero and Skeleton Technologies, has already been successfully installed on articulated vehicles, but this is believed to be the first time the system has been fitted to a rigid truck. The power conversion is made possible thanks to Skeleton Technologies’ patented graphene ultracapacitors, which facilitate better conductivity and are able to absorb and store greater amounts of power. This power is then channelled to the electric motor via specialised ECU software developed by Skeleton Technologies’ engineers in Estonia.

Taavi Madiberk, CEO of Skeleton Technologies, says: “The partnership with Fraikin highlights the significant impact utilising regenerative braking technology and energy storage can have. This is an important first step in realising essential efficiencies for the industry and we look forward to seeing further advances in this field.”

Mack Murray, President of Adgero, says: “The system is primarily designed for multi-drop urban distribution or refuse collection, as the more the brakes are used, the more power is created. Our initial tests were only based on six stops over a six-kilometre course and they surpassed our expectations. In a genuine urban environment we would expect the savings to be even greater.”

Alternatech can complete the entire conversion in a single day and say that the additional cost of the system could be recouped in fuel savings during the first three years in service for a typical medium truck. A conservative estimate for an operational life-span of the system is 10 years, often longer than the working life of the vehicle it is fitted to. It has been designed to be removed and re-fitted to a replacement truck when required.

Fraikin is making the vehicle available for demonstration within customer fleets across the UK. It will also be on display at the LoCITY event at the University of East London on 12 July 2017.