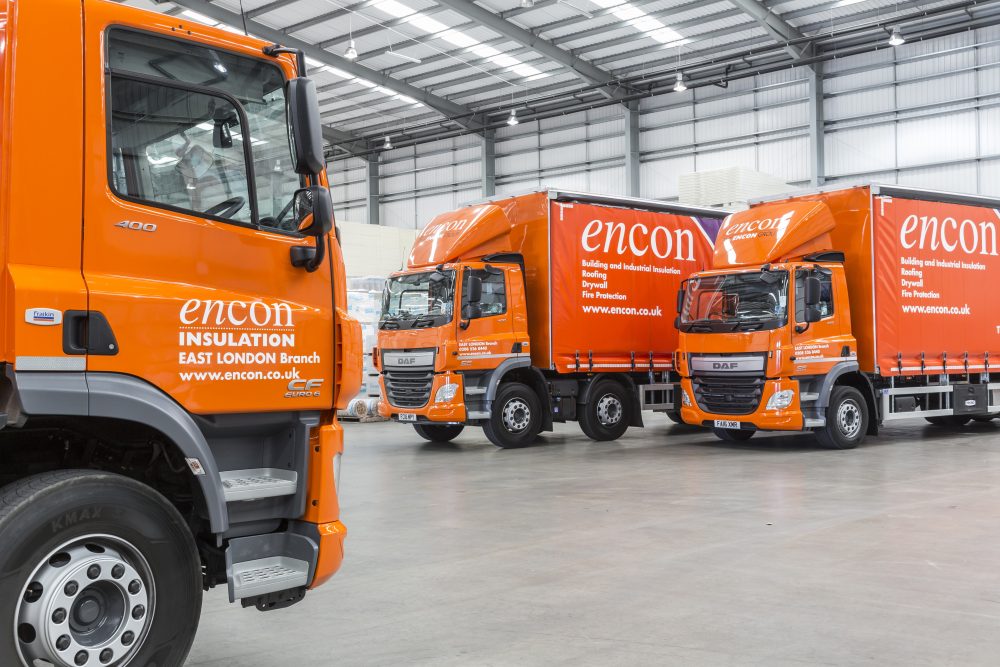 The deal for both new and replacement assets, ensures that Encon continues to operate some of the most technologically advanced vehicles on the road, helping to lower operating costs whilst maintaining the highest levels of safety.

In a forward-thinking first for the company, Encon has opted for trucks that feature rear steer axles. This set-up allows for a longer wheelbase and thus increased capacity. The rear steer capability also dramatically improves manoeuvrability – critical for Encon’s fleet, which specialises in delivering to cramped construction sites in busy urban areas. Thanks to the new assets from Fraikin, Encon can maximise safety during delivery, while expanding its capabilities and boosting business by servicing even the hardest-to-reach customers.

Barbara Sudlow, National Facilities Manager, Encon, says: “Fraikin’s understanding of what we do, where we deliver and what our customers expect of us, means it always ensures our fleet specification enhances the development of the company. The positive commitment of the Fraikin account management team to maintaining our fleet, quickly finding solutions to any problems and to always being on hand to offer insight through their extensive fleet knowledge are the cornerstones of this long-term partnership.”

Encon’s 25-year relationship with Fraikin guarantees that its commercial fleet consistently exceeds all current safety legislation, including full accreditation for the Transport for London Fleet Operator Recognition Scheme (FORS) – which ensures fleet operators adhere to strict safety and emissions standards. Going above and beyond this legislation, the trucks supplied by Fraikin protect vulnerable road users by including both reverse and side cameras, the latter enhancing the left turn proximity sensor fitted to the existing vehicles in the fleet, as well as automatic braking and a lane departure warning system.

Each truck is also fitted with a range of additional equipment for operator safety, including a fall arrest system, an improved load restraint package and energy-efficient LED lighting for on-site deliveries.

The fleet is monitored using mySmartFleet, Fraikin’s full telematics package launched in partnership with Masternaut in 2015. The system collates vital driving data that optimises fleet management, leading to improved economy and an increase in productivity, which in turn helps reduce operating costs – another defining factor behind the continuing partnership between the two companies.

About Fraikin
Fraikin Ltd   is part of the Fraikin Group , the largest commercial vehicle fleet services company in Europe, providing expert fleet management, contract hire and rental solutions to both the private and public sector. The Fraikin Group, established in France in 1944 by Gérard Fraikin, has operations in 16 countries, with more than 2,800 employees, 7,000 clients, 180 branches and a fleet of 60,000 vehicles. Its operations span Belgium, Czech Republic, France, Germany, Hungary, Italy, Luxembourg, Morocco, Netherlands, Russia, Saudi Arabia, Slovakia, Spain, Switzerland, Poland and the UK. Since 2007 Fraikin has been owned by CVC Capital Partners , one of the world’s leading private equity and investment advisory firms.

For further press information please contact:
James Boley at Garnett Keeler PR on 020 8647 4467 or by email to  james.boley@garnettkeeler.com

About Encon Insulation
Encon Insulation is the leading independent UK distributor of thermal and acoustic insulation, fire protection and roofing materials. The company operates from an extensive national network of branches, carrying all major brands under one roof in each location.  www.encon.co.uk