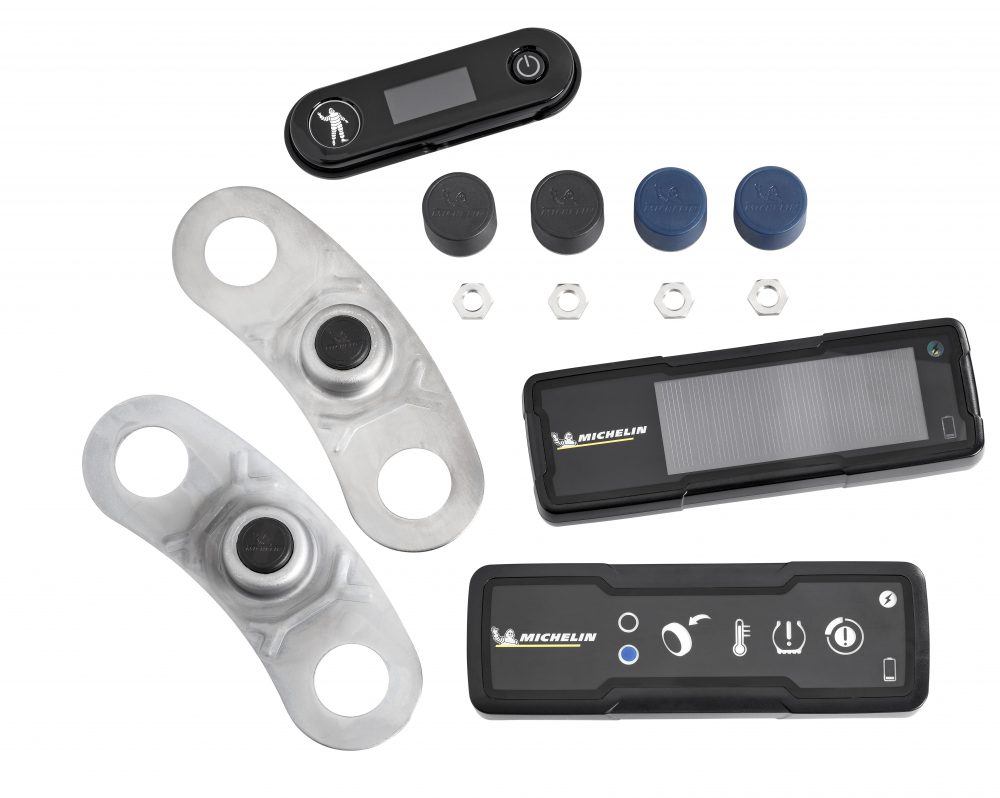 Its unique and patented technology means it is the world’s first in-motion driver alert system which detects the onset of wheel loss before detachment, as well as warning the driver to potential brake or hub issues that could lead to a fire if unchecked.

The system also warns the driver of over- or under-inflated tyres – an issue affecting huge numbers of commercial vehicles operating every day.

Robust sensors straddle two wheel nuts thanks to a specially designed bracket – with a pair fitted to each wheel – and if a nut starts to loosen by just 1mm of movement, a signal is instantly transmitted to the solar-powered display unit in the cab, alerting the driver to pull over. When connected to the vehicle’s telematics system, alerts can also be sent directly to the transport office.

Due to its location next to the wheel rim and braking mechanism, Michelin Wheel Security & TPMS Heavy Fleet’s onboard heat sensor can also detect brake issues involving low or high temperatures, including when they exceed 100ºC – a reading that could indicate maintenance issues such as sticking brakes or hub failure.

Wheely-Safe, a global Michelin licensee, says the system is a cost-effective solution for reducing the potential of catastrophic wheel loss incidents and brake issues, which can lead to loss of life, damage to vehicles and buildings, damage to reputation, roadside prohibitions, vehicle downtime, vehicle recovery and increased insurance premiums.

Gary Broadfield, Group Managing Director of Wheely-Safe and the inventor behind the technology, says: “We’ve taken an entirely fresh approach to tackling wheel loss. Existing solutions such as indicator tags can only detect potential wheel loss situations on stationary vehicles; but wheels don’t detach when a vehicle is parked!

“Our technology means that for the first time ever, a driver will receive an alert the instant a potential wheel loss issue is detected – no matter what speed they are travelling, or in what weather conditions – allowing them to pull over safely.”

Steve Jackson, Managing Director of Wheely-Safe, explains: “A detached wheel from a commercial vehicle has been likened by academics to a bouncing bomb, potentially colliding with other road users at an equivalent force of around 10 tonnes. That’s not a scenario any driver or fleet owner wants to experience.

“The Michelin Wheel Security & TPMS Heavy Fleet system can be fitted in a matter of minutes thanks to our smart auto pairing and auto calibration technology and has been designed to be extremely durable, monitoring tyres with pressures of up to 188 psi.”

It is complemented with an inbuilt tyre pressure management system (TPMS) – the same technology which has already made a big impact with the Michelin TPMS Light Fleet system for car, van, minibus and light plant operators.

It comprises a set of robust TPMS sensors which replace the traditional valve caps and auto-pair with the display unit, which fixes onto the cab windscreen. The system can be fitted to any brand of tyre and can monitor up to 50 tyres on a journey – with Wheely-Safe’s auto-pairing technology making it perfect for artic fleets where tractors are regularly pulling different trailers, and even for coaches pulling luggage trailers.

If the pressures drop by 7.5 per cent, a silent alarm is sent via the telematics system to the transport office, allowing the fleet manager to take action when the vehicle returns to base. If the pressures drop by 15 per cent, a visual and audible alert is sent to the driver via the in-cab display unit – with the alarm intensifying if the pressure drop exceeds 24 per cent or if fast leakage of 2 psi per minute occurs in any tyre. The sensors will also send a silent alarm to the fleet manager if any tyre is over-inflated by 20 per cent or more, and to the driver with over-inflation of 30 per cent or more.

The system can be supplied with a contactless tyre pressure checker which, when held next to the sensor, displays the exact pressure via the digital readout – without the hassle of connecting a traditional pressure gauge to the valve, which removes air and is unhygienic. It will also display the heat recorded from the wheel loss sensor over the last 24 hours, which will help the operator diagnose potential issues with the vehicle braking system and hub problems.

Fleets connecting the system to on-board telematics can even run checks to ensure a driver carried out their daily tyre inspections prior to setting out. And the system’s overnight mode sends a low-pressure message, via the telematics, allowing the maintenance team to make corrective action before the driver even arrives at the depot. Even without telematics, this mode will alert a driver as soon as he gets into the cab.

Wheel loss – the facts
In 2006 the Transport Research Laboratory (TRL) report into wheel loss on commercial vehicles, published for the Department for Transport (DfT), estimated that the typical annual frequency of wheel fixing problems in the UK alone stands at:

The importance of well-maintained Brakes/Hubs & Tyres – the facts
The wheel well is the second most common origin area of vehicle fire incidents (Source: US Department of Transportation Federal Motor Carrier Safety Administration)

Tyre under-inflation – the facts
Tyre pressures have a direct impact on a vehicle’s fuel economy, with under-inflation increasing both fuel usage and carbon emissions, whilst also posing serious safety risks to motorists and other road users.

Wheely-Safe Ltd is a technology start-up founded in 2010 by two lifelong friends – Gary Thomas, a Director of his own transport compliance consultancy, and Gary Broadfield, a Director of Technology and serial inventor for a large Japanese electronics manufacturer. Together they brought the marriage of skills required to help solve wheel loss issues in the automotive sector. The early years of Wheely-Safe have concentrated on attaining worldwide patent protection and technology small enough to fit near the wheels of all vehicle types, from cars to trucks and trailers, plus launching a retail product for the car market. 2018 sees Wheely-Safe launch its next-generation products for the fleet sector, including products for cars, vans, buses, coaches, trucks and trailers. www.wheely-safe.com

Ian Collier at Garnett Keeler PR on 020 8647 4467 or by email to ian.collier@garnettkeeler.com

Wheely-Safe Ltd is a technology start-up founded in 2010 by two lifelong friends – Gary Thomas, a Director of his own transport compliance consultancy, and Gary Broadfield, a Director of Technology and serial inventor for a large Japanese electronics manufacturer. Together they brought the marriage of skills required to help solve wheel loss issues in the automotive sector, and to tackle the huge number of vehicles driving every day on under-inflated tyres. The early years of Wheely-Safe concentrated on attaining worldwide patent protection and technology small enough to fit near the wheels of all vehicle types, from cars and vans to trucks and trailers – with its first products launched into the market during 2018.