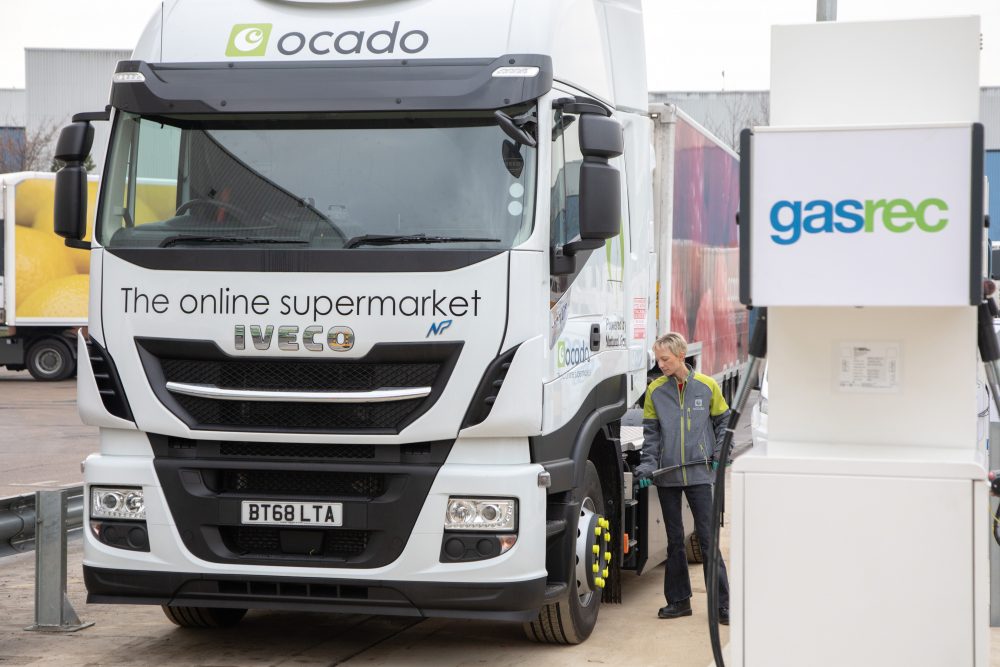 Environmental benefits of switching to gas include 99 per cent fewer particulate emissions and 70 per cent less nitrogen oxide than the latest diesel standard. The trucks are on average 50 per cent quieter than diesel vehicles, so are kinder to residential areas. The new vehicles will reduce the Ocado HGV fleet CO2 emissions by 29 per cent annually.

Ocado’s gas refuelling station has been designed and built by Gasrec, a major fuel supplier for natural gas-powered HGVs on UK roads. The businesses have agreed a 10-year support and maintenance contract, with Ocado also announcing plans to invest in natural gas technology at future sites.

The investment in natural gas is part of Ocado’s wider strategy to explore and invest in carbon-friendly alternatives to diesel fuel. The retailer is also testing electric and hybrid delivery vehicles.

Graham Thomas, Fleet Services Manager at Ocado said: “By investing in gas-powered vehicles, and in our first onsite refuelling station, we’re future-proofing our fleet and our business. Emissions from CNG are cleaner than Euro VI standards which start to take effect with the London Low Emissions Zone from April, and will soon be followed by a further 32 Clean Air Zones.”

Suzanne Westlake, Head of Corporate Responsibility at Ocado said: “The exciting work we’re doing with alternative fuels plays a huge part in becoming even more carbon efficient, helping us get closer to our goal of being the UK’s most environmentally-responsible supermarket.”

James Westcott, Chief Commercial Officer at Gasrec said: “Ocado reacted immediately to the range of dedicated natural gas vehicles becoming available to HGV fleets and we’ve been able to design, build and commission the onsite refuelling infrastructure in time to meet the new trucks entering service. It’s fantastic to be working with a company so focused on improving the sustainability of its fleet – a move firmly backed by Government, which has committed to supporting natural gas vehicles with a duty reduction until 2032.”

Note to editor: Gasrec is a major fuel provider for natural gas-powered commercial vehicles on UK roads. It supplies, builds and operates natural gas and biogas refuelling stations, enabling fleets to take advantage of a fuel which is significantly cheaper and better for the environment than diesel.

By investing in gas-powered vehicles, and in our first onsite refuelling station, we’re future-proofing our fleet and our business.