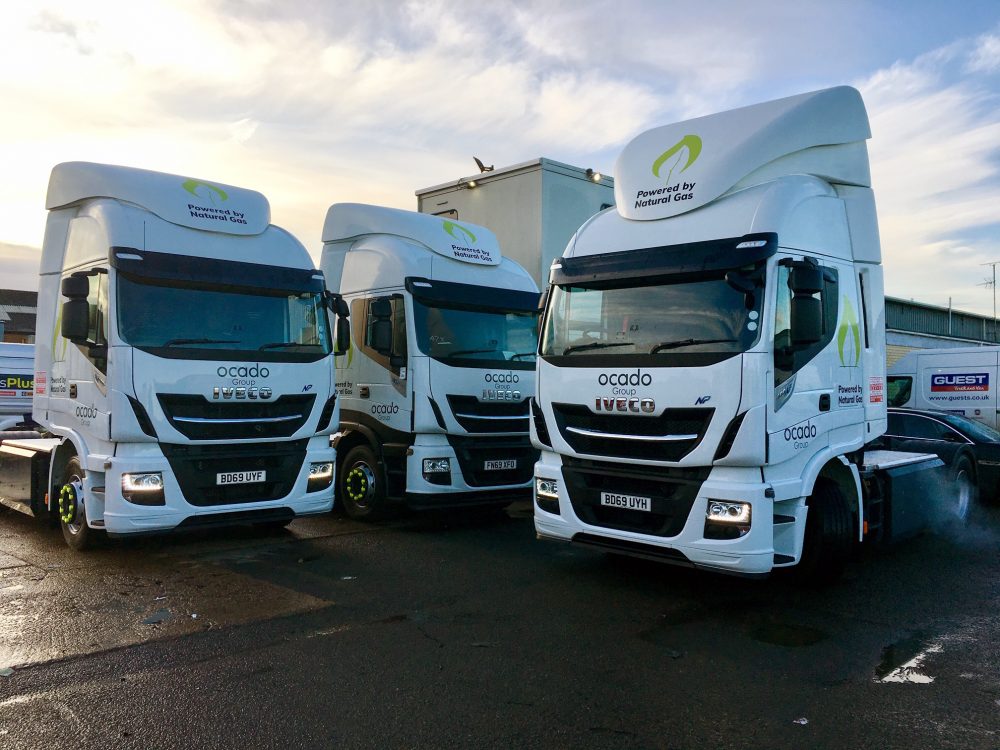 Ocado Group has continued its drive towards an eco-friendly future by ordering a further 30 natural gas-powered trucks for its distribution fleet. Ten have gone into service already, while the remaining 20 are due to follow throughout the year, doubling the number of trucks in the group’s HGV fleet running on gas.

In January 2019, the online supermarket became the first UK retailer to self-fund the purchase of an onsite grid-connected gas refuelling station – with work now underway on phase two.

The facility at Ocado Group’s Hatfield Customer Fulfilment Centre was designed and built by Gasrec – the UK’s largest supplier of gas to the road transport sector – and has supported the firm’s initial investment in 29 IVECO Stralis NP tractor units powered by blended biomethane, a Compressed Natural Gas (CNG).

Graham Thomas, Fleet Operations Manager at Ocado Group, says: “We are committed to finding environmentally-friendly alternatives to diesel for our transport operation and this latest investment is the next step on that journey. As well as increasing the number of vehicles on the fleet we have also increased our blend of biomethane from renewable sources.

“We didn’t order any new diesel trucks in 2019. Indeed, since our investment in the refuelling site in Hatfield and our first 29 CNG trucks, we have reviewed the market carefully and looked at where the various manufacturers stand in terms of natural gas technology. We are fully confident we are heading in the right direction, hence the order for a further 30 IVECOs.”

The majority of the new vehicles will be refuelled at their own site in Hatfield, with 10 operating from the Dordon Customer Fulfilment Centre and using Gasrec’s flagship DIRFT facility, just off the M1 near Daventry, to refuel.

“The performance of the first batch of Stralis NPs has been great,” adds Thomas. “We’ve now clocked up more than 4,000,000 km of experience under gas power, and we know we can comfortably cover a 550km range when operating longer routes with our single deck trailers.”

Environmental benefits of switching to natural gas include 99 per cent fewer particulate emissions and 70 per cent less nitrogen oxide than the latest diesel standard. Natural gas-powered vehicles are also, on average, 10db quieter than diesel vehicles, so are kinder to residential areas.

Ocado Group’s commitment to sustainable transport was recognised at the end of last year, claiming the Private Sector Fleet of the Year (medium to large) Award at the 2019 GreenFleet Awards.

“It’s a fantastic accolade, having been early adopters of this technology and making a big investment in the gas station,” says Thomas.

Gasrec is currently working on the second phase of development at Hatfield, which will add additional refuelling capacity and is on track to open this summer.

James Westcott, Chief Commercial Officer at Gasrec, says: “Ocado Group is leading the way when it comes to reducing the carbon emissions of its commercial operation. They are a terrific customer to have won in the first place, and we are extremely pleased to be helping them as they continue their move away from diesel to a cheaper and cleaner alternative.”