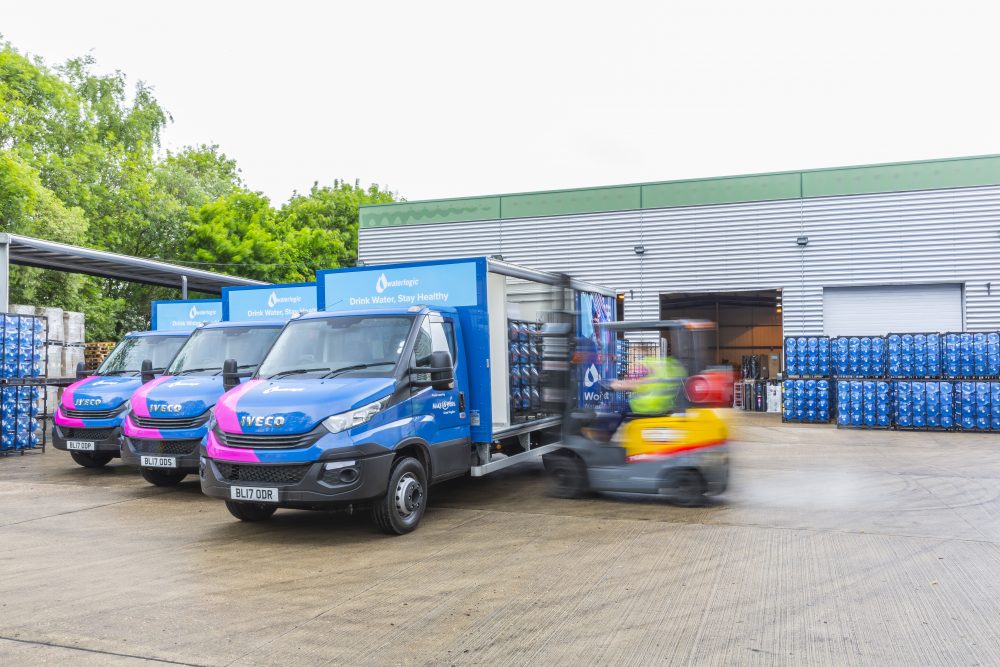 Fraikin has delivered a fleet of 19 new commercial vehicles to Waterlogic on full-service contract hire, strengthening a 13-year relationship with the national water cooler company.

The new deal is structured over four years, as opposed to six years previously. Fraikin says this will enhance vehicle reliability and uptime for a fleet which is worked hard running fully laden most of the time.

The Daily light commercials represent a mix of fleet additions and replacements, enhancing the fuel economy and environmental footprint of an 80-strong fleet, whilst also reducing its average age.

Kevin Matthews, National Operations Director at Waterlogic, says: “Fraikin is a long- standing supplier and we really value their strategic advice. It’s not a case of simply ordering new trucks from Fraikin – they looked at our precise requirements and maintenance history, and recommended a totally new solution which will make our business more efficient and improve our corporate image.”

Fraikin also specified the new vehicles with an eight-speed automated transmission to deliver improved driver comfort and fuel economy. The vehicles are mounted with bespoke-built curtainside bodies manufactured by Transload, featuring stillages mounted to the floor for carrying water bottles.

As part of the contract, Waterlogic will benefit from fixed monthly payments as well as full servicing, maintenance and repair, tyre replacement, routine safety inspections, road fund licensing and 24/7 breakdown support. Fraikin will manage all maintenance via an approved third-party network on a collection and delivery basis.

Matthews adds: “With Fraikin, we can concentrate on our business, safe in the knowledge our fleet is being impeccably maintained and managed. Fraikin understood our business from day one and always make things very easy for us. That’s why we’ve been with them for so long.”

Waterlogic is the UK market leader in the provision of water dispensers and coolers to customers spanning the office, education, hospitality, industrial and leisure sectors. It also works in partnership with the Make-A-Wish Foundation UK and raises funds through the sale of its water bottles or dispensers. So far it has raised £200,000.

Fraikin Ltd is part of the Fraikin Group, the largest commercial vehicle fleet services company in Europe, providing expert fleet management, contract hire and rental solutions to both the private and public sector. The Fraikin Group, established in France in 1944 by Gérard Fraikin, has operations in 16 countries, with more than 2,800 employees, 7,000 clients, 180 branches and a fleet of 60,000 vehicles. Its operations span Belgium, Czech Republic, France, Germany, Hungary, Italy, Luxembourg, Morocco, Netherlands, Russia, Saudi Arabia, Slovakia, Spain, Switzerland, Poland and the UK. Since 2007 Fraikin has been owned by CVC Capital Partners, one of the world’s leading private equity and investment advisory firms.

072 WATERLOGIC REFRESHES ITS FLEET WITH FRAIKIN