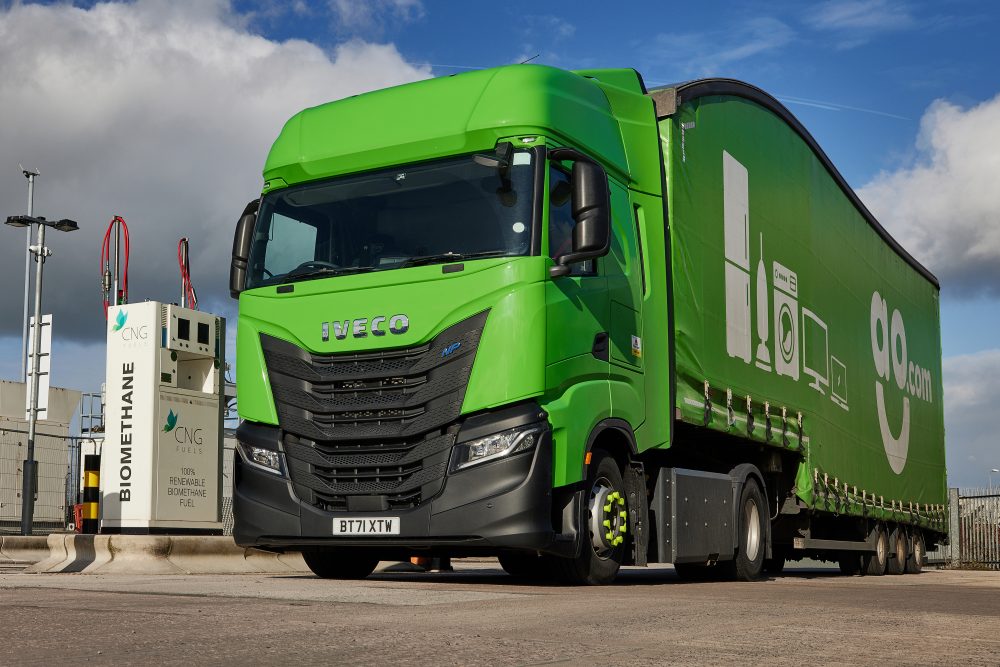 Fraikin has delivered 10 new CNG-powered tractor units into operation with AO, as the online electricals retailer looks to reduce its carbon footprint and improve sustainability across its commercial vehicle fleet.

Signed to a five-year, full-service contract hire agreement, the new IVECO S-WAY NP 4×2 tractor units are the first in AO’s 129-strong trunking fleet to operate on natural gas. The vehicles run on compressed biomethane and replace older, diesel-powered trucks. Utilising its industry expertise, Fraikin was able to highlight how the new IVECO trucks could provide a cost-effective solution with the right environmental credentials.

David Ashwell, Managing Director of AO Logistics, says: “We’re thrilled to welcome the new CNG vehicles into our UK trunking fleet and continue our successful partnership with Fraikin. At AO Logistics, we are always looking at ways to improve our operation in terms of both sustainability and fuel efficiency – trialling these new IVECO tractor units is a fantastic step towards reducing our impact on the environment.”

Supplied in AO’s striking green vinyl livery, the new vehicles will operate with both single and double deck trailers. Carrying large appliances between the company’s depots in Crewe and North London, they are expected to clock up around 125,000 miles per year.

The new IVECO S-WAY NP features some of the most mature gas driveline technology available on the market, enabling operators to dramatically reduce carbon emissions by up to 95 per cent when running on biomethane.

The new truck design features improved aerodynamics to help reduce drag and improve fuel efficiency. With large, 1,052-litre fuel tanks, the S-WAY NPs will be more than capable of handling their intended operational trunking routes, offering a range of up to 380 miles on a full tank.

Mark Guilfoyle, Business Development Manager at Fraikin, says: “Having already supplied 63 tractor units into the fleet since the companies began working together in 2017, Fraikin has built up a solid understanding of AO’s business and are acutely aware of what is required from the vehicles it operates, as well as its wider environmental aims.”

Over the last two years, the retailer has increased its warehousing capacity by over 80% to 1.5 million sq ft, rapidly growing its distribution network to over 25 depots across the UK. In total, AO currently operates more than 1,000 commercial vehicles, including 3.5-tonne ultra-light weight home delivery vans supplied on contract hire by Fraikin.

As a business, AO is also a leader in the recycling of used white goods, with its own state-of-the-art recycling facility in Telford – a commitment to lowering its environmental impact Fraikin has helped to mirror with the move away from fossil fuels.

If the new trucks prove to be a success, the company will look to replace more diesel-powered assets, with Fraikin once again ready to offer guidance and advice on the best available options.

About Fraikin
Fraikin Ltd is part of the Fraikin Group, the largest commercial vehicle fleet services company in Europe, providing expert fleet management, contract hire and rental solutions to both the private and public sectors. The Fraikin Group, established in France in 1944 by Gérard Fraikin, has operations in 11 countries, with more than 2,800 employees, 7,000 clients, 157 branches and a fleet of more than 58,000 vehicles. Its operations span Belgium, France, Germany, Italy, Luxembourg, Netherlands, Poland, Saudi Arabia, Spain, Switzerland, and the UK.

About AO:
AO World plc, headquartered in Bolton and listed on the London Stock Exchange, is an online electrical retailer, with a mission to be the global destination for electricals. Its strategy is to create value by focusing on being brilliant for our customers to make AO the destination for everything they need, in the simplest and easiest way, when buying electricals.

We sell major and small domestic appliances and a growing range of electrical products in the UK and Germany, delivering them via our in-house logistics business and carefully selected third parties. We also provide ancillary services such as the installation of new and collection of old products and offer product protection plans and customer finance.

AO Business serves the B2B market in the UK, providing electricals and installation services at scale.

AO launched in Germany in October 2014 with MDA and now sells Floorcare, AV and SDA categories. AO also has a majority equity stake in AO Recycling, a WEEE processing facility, allowing AO to ensure its customers’ electricals waste is dealt with responsibly in the UK.

AO is green in more ways than one. Find out more about its sustainability initiatives here: https://ao.com/sustainability.