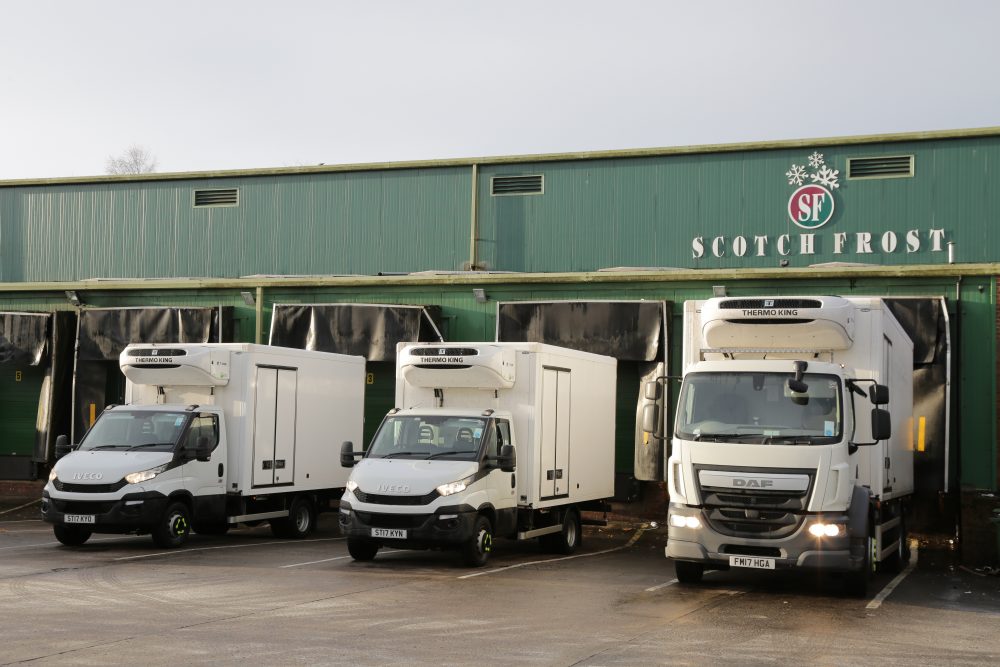 The company’s trust in Fraikin’s ability to handle all compliance, financing and maintenance of its vehicles has been built up over many years, and was critical in securing the latest deal.

John MacKinnon, Group Transport Manager at Scotch Frost of Glasgow, says: “Fraikin has continually demonstrated how well it understands our business. We benefit from a great relationship at both Account Manager level and from the branches which look after our fleet, plus the contract hire model works well for us from a finance perspective. When it came to making a decision about replacing older vehicles, growing the fleet with Fraikin was a straightforward one.”

Fraikin has also fitted the vehicles with one of the most sophisticated camera systems on the market. The ProVision True 360º increases driver visibility by streaming a complete, 360-degree view of the vehicle to a 7.5-inch in-cab screen, helping to improve driver safety and providing an extra level of load security. The system facilitates live access for the transport management team, plus constantly monitors driver behaviour, recording parameters such as harsh braking and acceleration to help ensure optimum fleet performance.

Mr MacKinnon adds: “Fraikin understands the vehicles we need, and is always happy to tailor the spec to our exact requirements. Their independence also means we can access the best possible make and model of vehicles for our needs, ensuring we are always operating the cleanest, safest and most efficient fleet we can.”

Each new truck has been mounted with insulated box bodies by Tekbo and refrigeration units by Thermo King, delivering ambient, fresh and frozen ethnic food and drink products across the UK and Ireland. Operating five days a week, the vehicles will cover approximately 40,000km a year.

With a fleet spread nationwide, servicing and maintenance is being undertaken by a mixture of Fraikin’s own workshops and approved third-party repairers, each selected for maximum convenience. Most service work is scheduled by Fraikin to take place out-of-hours, to minimise disruption – with Fraikin’s Bellshill branch located less than four miles from Scotch Frost of Glasgow’s head office and primary operating centre in Uddingston.

Established in 1967, Scotch Frost of Glasgow is one of the UK’s longest-running suppliers to the ethnic food sector, operating from seven distribution depots based across the UK and Ireland.

About Fraikin
Fraikin Ltd is part of the Fraikin Group, the largest commercial vehicle fleet services company in Europe, providing expert fleet management, contract hire and rental solutions to both the private and public sectors. The Fraikin Group, established in France in 1944 by Gérard Fraikin, has operations in 16 countries, with more than 2,800 employees, 7,000 clients, 180 branches and a fleet of 60,000 vehicles. Its operations span Belgium, Czech Republic, France, Germany, Hungary, Italy, Luxembourg, Morocco, Netherlands, Russia, Saudi Arabia, Slovakia, Spain, Switzerland, Poland and the UK. Since 2007 Fraikin has been owned by CVC Capital Partners, one of the world’s leading private equity and investment advisory firms.